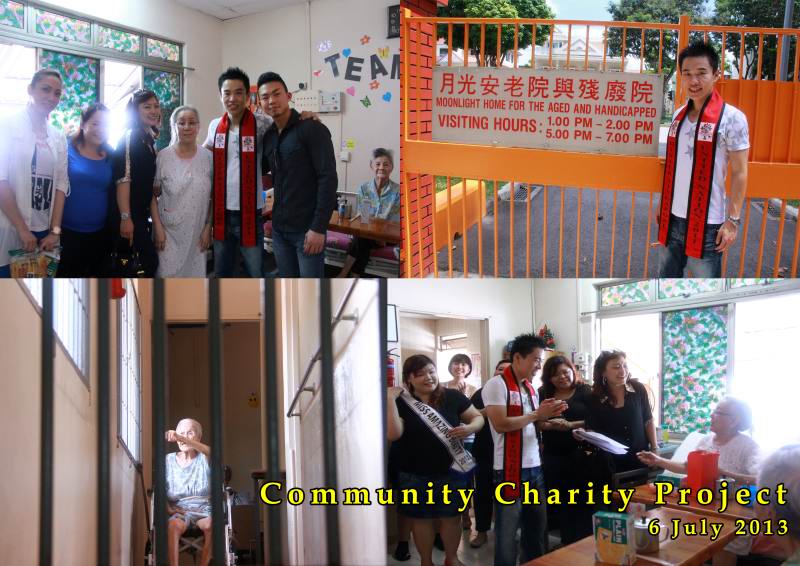 There are many ways in which we can contribute back to society. Giving money is one of them. Volunteering our time is another. If you ask me, I would prefer the latter. Just ask the residents of Moonlight Home for the Aged & Handicapped. I’m positive they would rather see a visitor’s face or hear a comforting word, then be left on their own holed up in a room of four walls…

Together with other title holders, we descend on the old aged home nested in the Serangoon/Yio Chu Kang area. This is our community charity project for this year. Approaching the bright and cheery orange gates, our hands are full of goodies which we have packed in the morning. Yet enter the same gates of the old aged home and we are greeted by tales of desolation and resignation.

It pains me to hear of such tales of how some senior citizens have been left in the care of the home because they have been regarded as a social nuisance by their children. One senior lamented that she has not seen her daughter at all for the past two years ever since she stayed at the home. Sometimes I really wonder where the so-called virtue of filial piety has gone? Maybe it has been eroded over the years. Anyway, as we did not hear both sides of the story, we are certainly in no position to judge. It could also have been that the children are incapable of taking care of their elderly parents and felt it was in their best interest that professional care be hired to look after them.

Whatever each resident’s reason could be for admission here, it was the job of us volunteers today to bring a little cheer to them. Besides giving them the food items we brought, we started to fill each room with the tunes of Chinese, English and Malay songs. Some folks even joined us when they heard a familiar Teresa Teng number resounding in the background.

Being in the position to give back to society makes me feel privileged. This is something meaningful and it shows there is still humanity left in this fast-paced world. If we can make it happen, I’m sure all readers out there too can start caring and sharing.