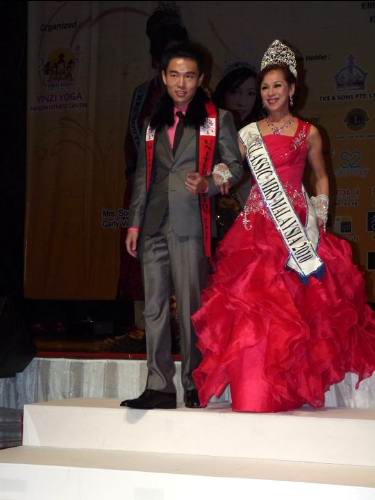 It was definitely a night of glitz, glamour and girls. It is a gala event alright. But perhaps I need to make a slight correction here – I should call them ladies instead.

For standing in front of me were 16 ladies vying to be crowned beauty queen tonight. I’m at the Malaysia capital of Kuala Lumpur to judge the Classic Mrs Malaysia International World 2011 Pageant. The pageant is open to married Malaysian ladies aged 45 years old and above, and have at least one child.

I don’t know who will win eventually but one thing I know for sure and that is each of these ladies has put in a lot of effort.

But what proved to be the biggest surprise of the night was that the oldest contestant was 61 years old. Wow! Yet from the way she sizzled on stage, one could not really guess her actual age at all. At the age of 45 years and above, many would have thought of retiring and not actually exposing yourself to the limelight by coming forward to take part in a pageant like that as it takes a lot of time to prepare from the selection of the gowns to practising the catwalk, doing their portfolio to gathering their supporters to cheer them on. Yes, let alone 61 years old. I salute her!

I would like to share with my readers what I chose to wear to grace this event. I call it the creative black tie look. If you watched the Korean drama Winter Sonata, you may faintly recall an image similar to my style tonight. Although it was a look which I have never attempted, I think I looked glam enough to blend in with the rest, or perhaps steal the limelight from some? 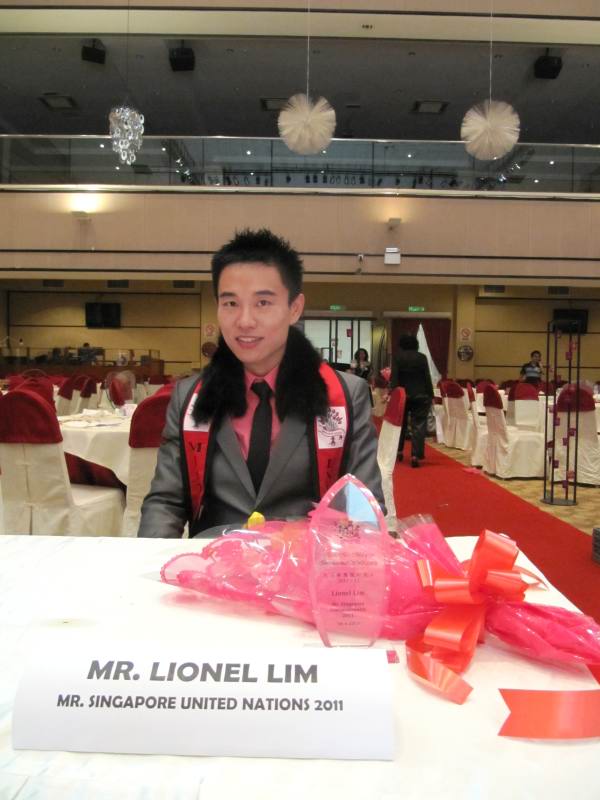 At the judge’s table

Being a judge was more than just sitting at the judging table and watching the show from the sidelines. We were involved in the pageantry as well. There was a march-in for all the different title holders and I had the honour of being paired up to walk in together with Mdm Lim Siew Cheng, winner of Classic Mrs Malaysia International World 2010. Striding in on the red carpet and then up the T-stage and waving to the audience, it was a magnificent moment. Any jitters? No, I just soaked in the atmosphere and enjoyed myself 🙂 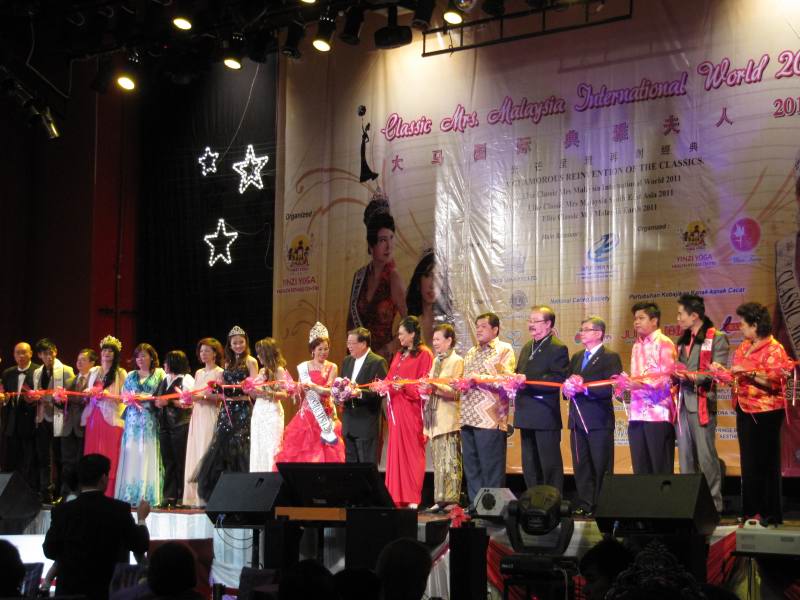 Ribbon cutting before the pageant kicks off…

Besides the mega-star like treatment which also involved me in the ribbon cutting on stage to symbolize the start of the official pageant, I relished the opportunity to mingle with the other title holders from both Malaysia and Singapore. It felt really heartwarming as I could tell everyone bonded well like one big happy family. And to have other Malaysian celebrities and dignitaries in the same room further boosted the star power.

Perhaps because I was a guest judge, I was given an excellent seat at the judge’s table. In fact, I was practically planted in front of the T stage. Thus it was not surprising to find all the media cameras and videos set up behind me as all were jostling to capture the best angle. Needless to say, I had an excellent view of the contestants as they walked the T stage and made the turn. 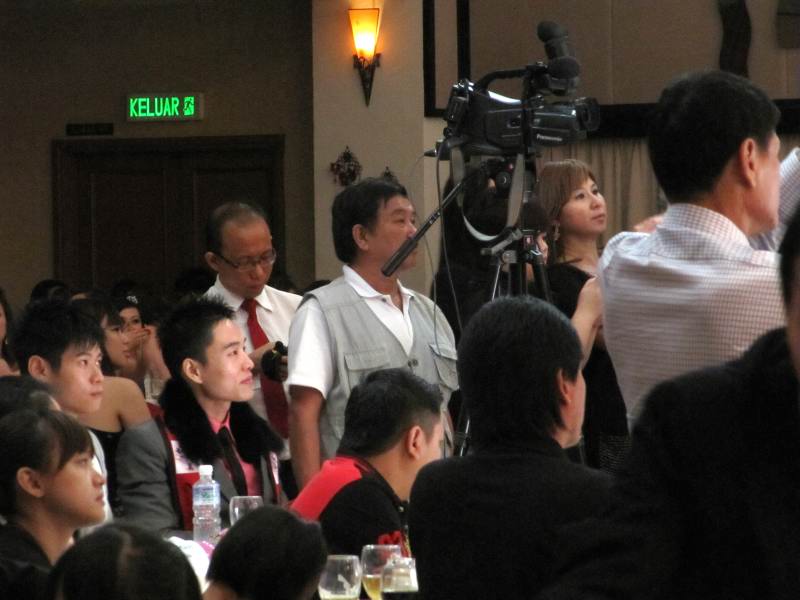 Surrounded by the media and fans 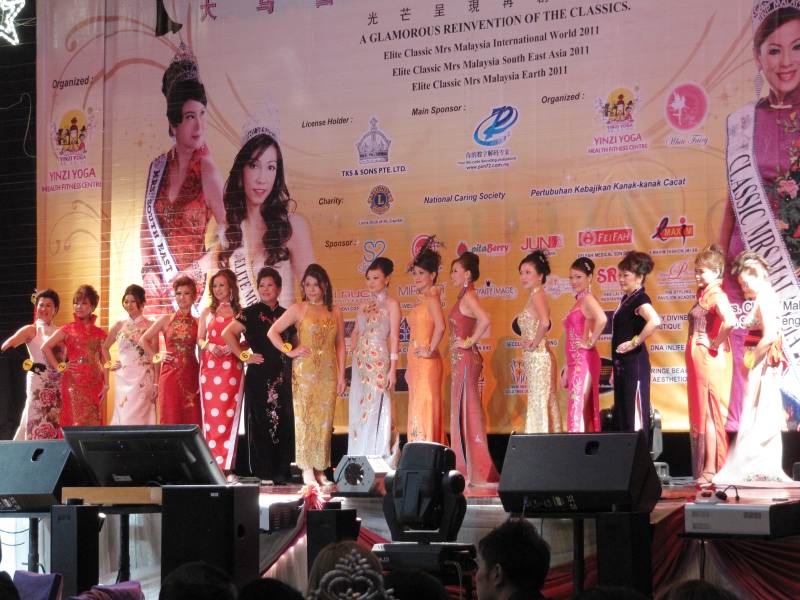 Sometimes when you take part in a pageant or a competition, it’s not about winning. It’s about having the courage to take part and the spirit to live life to the fullest. For the 16 ladies, it definitely was a night to remember. More importantly, it’s the journey from being a housewife, mother and grandmother to being a woman in her own rights who owns the stage. Most important is that each was happy and basked in the glorious moment. Well, opportunities like these do not come all the time so I’m truly glad for all 16 ladies.

From the moment they signed up for the pageant – going through the auditions to getting in to the finals is testimony of their growth. To be fully and personally engaged in each and every step of the beauty queen journey is a fulfilling one.

As with any pageant, besides aiming to win the main title, one also had the chance to win any of the subsidiary titles such as Mrs Charming, Mrs Most Beautiful Skin, Mrs Most Confident and Mrs Crowning Glory. In total, there were 15 subsidiary awards to be handed out. 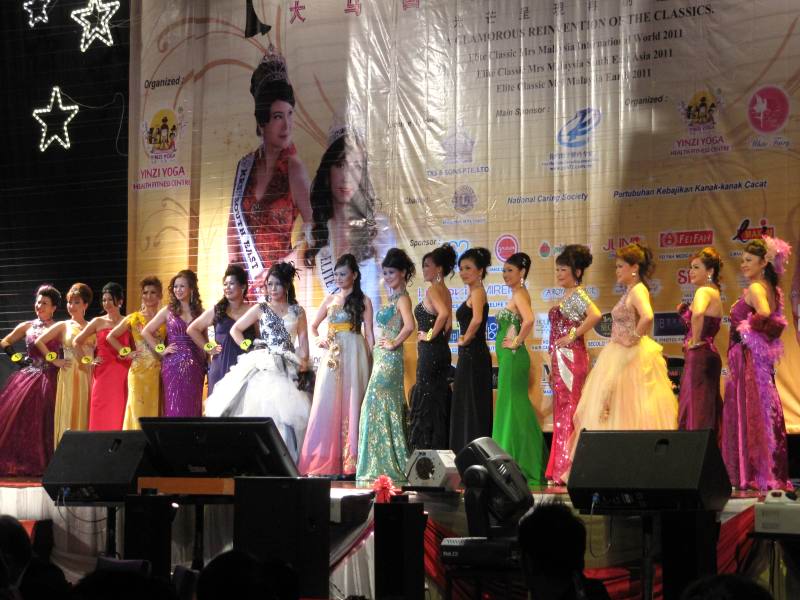 Who will win the Best Evening Gown?

To be honest, having to decide the Best Evening Gown gave me the biggest headache as I personally had a few favourites. It was difficult to narrow down to the top two Best Evening Gowns simply because all the gowns were not something the ladies picked off the rack from the sponsor. Instead, each gown was the love labour of each lady who either designed or conceptualized before relaying their ideas to the gown sponsor. If you saw the lovely gowns that were paraded, you would agree with me that each embodied beauty, glamour and a touch of each lady’s unique personality.

For cheongsums, this was what I particularly liked – the silver number with peacock feathers as I felt it really made her look regal, like a queen. 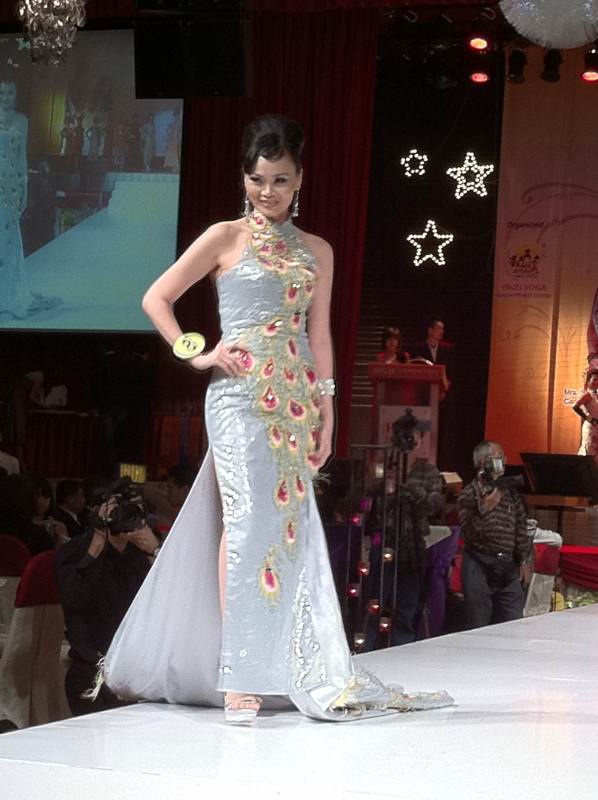 The lady who won the Best Physique is a mother of four. From her taut green spandex inspired gown, you couldn’t even detect any inch of fat on her. Someone get her an endorsement deal quickly!

I took a lot of photos. Naturally. Besides the ladies getting the fair share of my attention, the special performances too earned my praise. I loved this group photo with the four singer-dancers. In this age and time, versatility is the name of the game. And they certainly lived up to this tag as they performed everything from a musical number ala Burlesque, “Nobody” from Wonder Girls to “One Night Only” from Dreamgirls. Do I look like their manager? Come on girls…it’s showtime!!

I must also mention the other special performances such as the 9 year old boy whom everyone thought was just another boy. But when he opened his mouth to sing, our jaws dropped as he sang like a seasoned veteran.

But the focus of the pageant remains squarely fixed on the ladies who did quick wardrobe changes to deliver yet another splendid dance medley in their 1960s agogo inspired outfits. 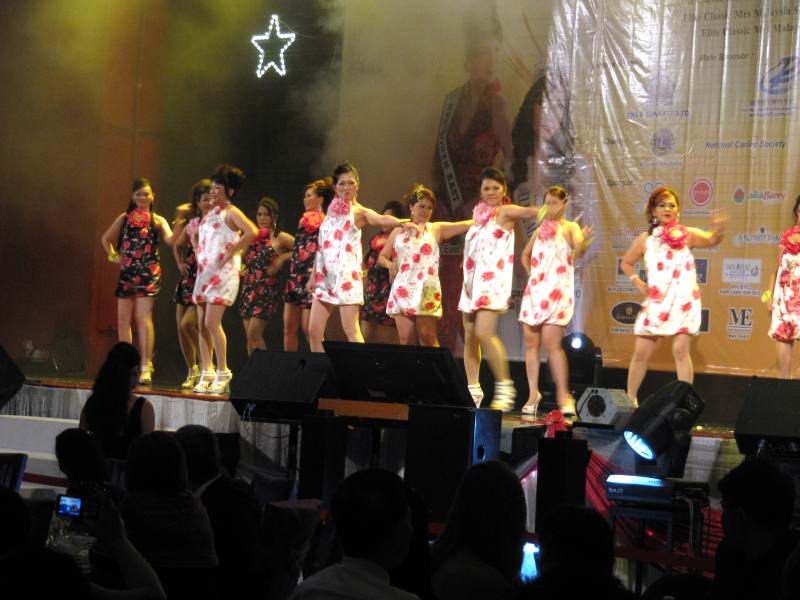 Besides the evening gown and catwalk segments, the most refreshing inclusion had to be the talent performance segment. Taking a cue from other talent shows perhaps, the ladies’ performance ran the gamut from oldies; the “Big Spender” number to a getai inspired performance with her blue ruffled feathers; and a disco number from Cantopop queen Sammi Cheng.

Decision making is always difficult as everyone truly shone. This night belongs to them. Cheers were deafening and emotions ran high. But we the judges had to do our task and select the Top 6.

Fast forward to the Question & Answer (Q&A) segment and there I was again in action. Yes, some of us were allocated questions to ask the Top 6 ladies, depending on which numbered envelop she picked. Well, fate had it that 2 ladies chose me to ask the question. Oh well…LOL. And that’s when I saw the cameras panning towards me and my face screened on the walls in full exposure. 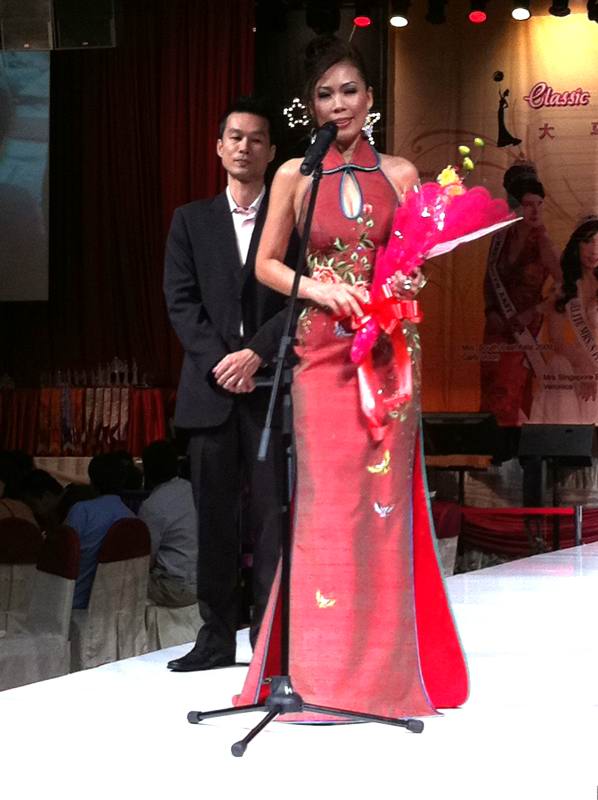 The eventual winner during the Q&A segment 🙂

Summing up my judging duties tonight, I would like to thank the Malaysians for their hospitality as we were showered with lots of attention and flowers. I was involved in every segment which I could be involved, ranging from walk-in of all title-holders to the introduction of judges on stage one by one to Q&A to presentation of appreciation in the form of final photo-taking with cameras clicking away non-stop. And just like the eventual winner tonight, I too felt like a superstar. 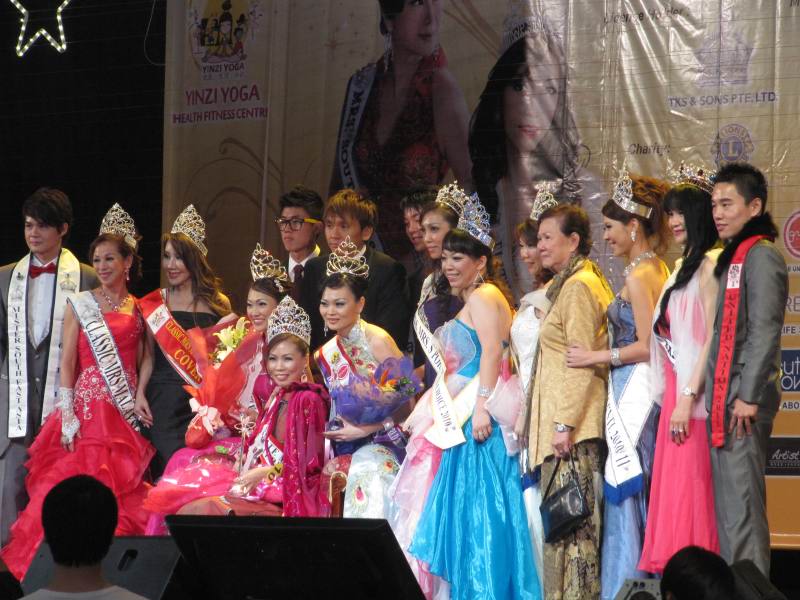 One for the memories with all the winners!